In 2016, we received a tip that high levels of radiation were detected at the Hazelwood Interim Storage Site on Latty Avenue adjacent to Coldwater Creek.

Our concern was that, if there were hotspots that had not been cleaned up or originally detected,
Coldwater Creek could be re-contaminated and residents’ properties would then be exposed again. 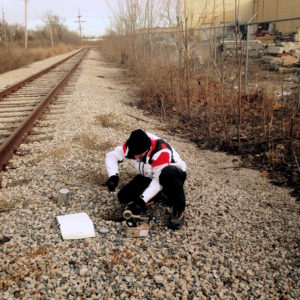 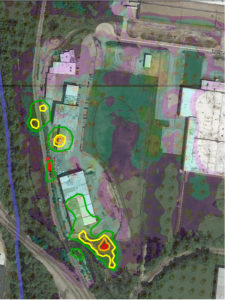 We asked a professional radiochemist to come and sample the same area that we received the tip on. The red rectangle (in the left image above) represents where we sampled and the green ring around it represents the FUSRAP’s 2005 Record of Decision that characterized the Sum Of Ratios as 10-30. Our Sum of Ratios results came in as 18,310.00. The maximums we found per sample were:

Our samples were processed and analyzed at the Hygienics Lab at the University of Iowa. When the first results came back, the Lab did a separate round of testing to double-check the results before releasing them to us. Once we saw the results, and given the fact that the Thorium 230 sample’s level was so high, the Army Corps of Engineers and St. Louis Health Department were notified and sent our results.